Skip to after navigation

“Put yourself in someone else’s shoes” is something we have all heard. “Empathy: a short film” is a commentary on the need to empower others through empathy. In English class, we were given an assignment: make a film, play, or story highlighting an issue in the world we can change. Using visual storytelling, we present the need for empathy in our polarized world. 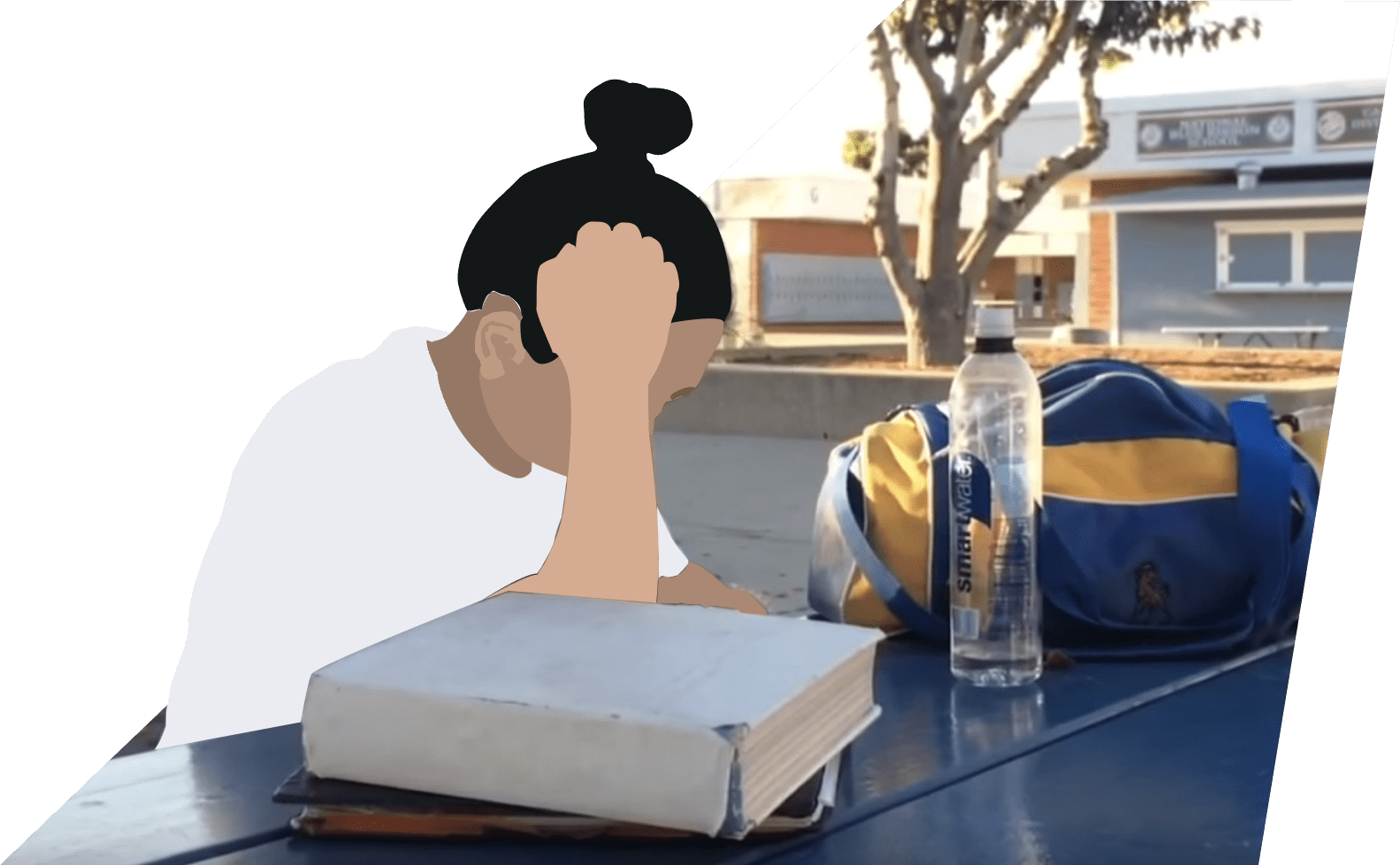 My group consisted of three other girls. Our goal was to encapsulate the effects of empathy in a high school setting. Together, we drafted a script and created a filming outline. Two of the girls we casted and I shot and edited the scenes. We centered our research on the necessity of empathy in our lives. When I think of the necessity of empathy, I think of the prevalence of criticism and extremism. With the influence that social media holds in our lives, opinions spread both furiously and quickly. As a typical teenager, I am an avid user of social media, and I have noticed the lack of empathy online when netizens post a tweet or comment on a YouTube video.

In our film, we choose to focus on empathy and appearances. When interviewing a friend, she spoke candidly about “feeling judged” because of her “appearance” and the pressure she felt to “look good.” In this day and age, “judging” has become a word used negatively and the word “appearances” has become intertwined with “looking good.” Through our film, we hope to highlight the superficiality of appearances and depict the rewards of spreading empathy.

We focused on a girl named “Ashley,” who struggles with addiction, and a girl named “Kaelin,” who has grown to love herself despite things that she characterized as flaws. Kaelin empathizes with Ashley’s addiction and the feelings of loneliness that she feels. 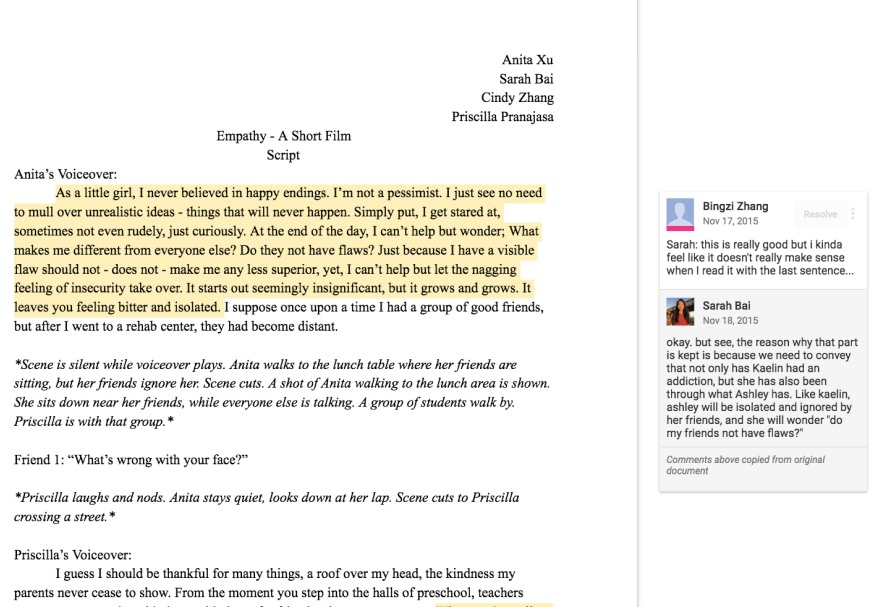 As we were filming, we used a Multi-camera shooting technique. Many scenes were shot using multiple cameras and pieced together. This multi-camera shooting technique adds a layer of complexity and suspense to the scenes. This can be seen in the “Bathroom scene.” As Ashley rushes into the bathroom, we use the multi-camera shooting technique to reflect the urgency and desperation Ashley feels when a wave of nausea, a result of her addiction to pills, engulfs her. Another technique we used was the Shaky Camera technique. This cinematic technique is employed to add an electronic news-gathering (ENG) or documentary feel to a scene in hopes of conveying the idea that it was shot live and without artifice. This can be seen in the “Bathroom scene.” Ashley sits conversing with her friends, but a wave of nausea forces her to rush to the bathroom. As she is running, we apply the shaky camera technique as an invite to the audience to immerse in the action. 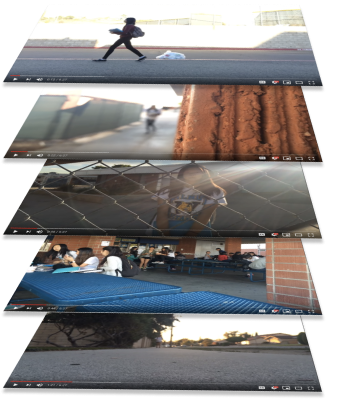 During the postprocessing stage, the first technique we used was the Cut-to-Black technique. At the climax in our film, we cut to black following a sudden surprise scene. This was used in the “Track scene.” As Ashley and Kaelin run at the track for class, Ashley suddenly faints. This comes because of her usage of pills. We apply the cut-to-black technique to prolong the suspense and the impact of this scene. Another technique we employed was the Fast cutting technique. In many of our scenes, we employed several consecutive shots of quick scenes to highlight the chaos in the scenes themselves. During the “Bathroom scene,” we add the fast cutting technique during Ashley’s scene in the bathroom. As I was editing, I found that the quick clips were more impactful during this scene than a longer clip. 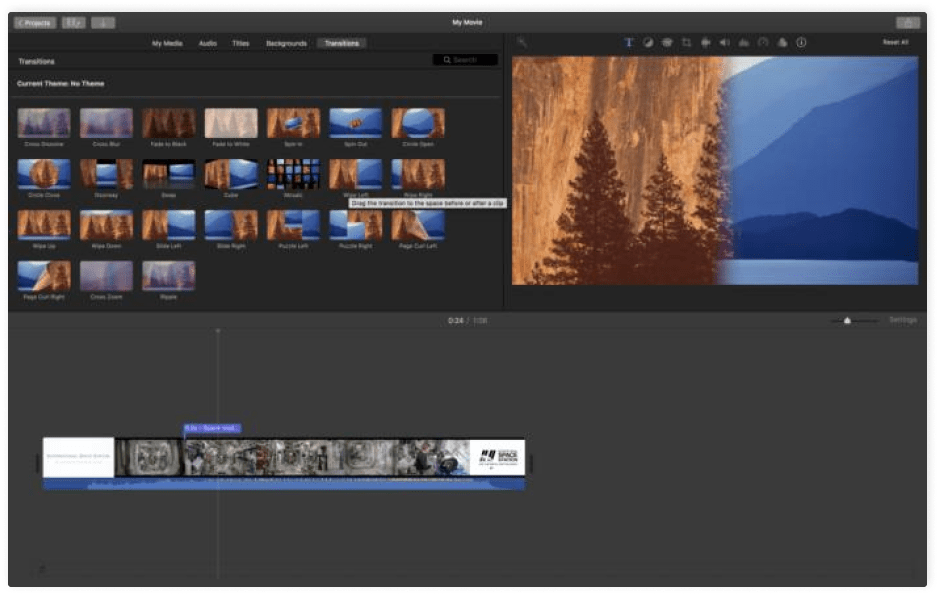 After we published this video, we received a lot of positive feedback and many reached out to share their stories. Through this experience, I witnessed firsthand the power of visual storytelling and the impact one story can make. Though we visualized one girl’s journey where she blossomed due to the empathy of her friends, many more are not as fortunate as Ashley. It is important to remember to treat others empathetically because the feeling of struggling is universal and everyone has had an encounter with helplessness. In our polarized world, we can build and mend bridges by sharing our empathy.